Marieke Stakenburg – industrial designer and wayfinding expert with her own company – and Robert van Langh live together with their three sons Alain (6), Theodore (4) and Leopold (2) in a loft in PATCH22. “Where can you find a home large enough so that your children can learn to ride a bike in the living?”

Robert – head of the Conservation & Science department of the Rijksmuseum – was the neighbor of architect Tom Frantzen on Borneoeiland. He was one of the first to know about the plans of PATCH22, even before he met his wife… Marieke: ‘Robert and I may have known each other for about three days when, during a boat trip he indicated the location, where PATCH22 is now, that he might want to buy a loft.

Never thought we would live here six years later, in a self-designed loft with two children.” Robert and Marieke were the very first buyers. “We wanted it to be built quickly. We have been chartering all kinds of people. Resulting in it going ahead, and we have lots of great neighbors!”

“Because of the wood, the building is basically very warm and cozy”

The loft of Marieke and Robert is 186 m2 and shaped like a “tetris” – with a part on the sixth and a larger part on the seventh floor of the building. “We have a total of 60 m2 of loggias.” “Where can you find a new building with such high ceilings and such a large outdoor space? We have an 18 meter long glass facade with a large panorama of Amsterdam. During the day you see the rugged North, in the evening you really live in a metropolis with a skyline and lights …” Just like with Top-Up, wood is an important part of the building. “Because of the wood, the building is basically very warm and cozy.”

When choosing PATCH22, “self-determination” played a major role. “We both have many ideas about how we want to live. It is almost impossible in any project that you can determine everything yourself: where do we put the stairs, where does the kitchen go. And, as an advantage over completely self-building, the basis of the building is completely in order: the architecture, the installations, the construction. Your responsibility only concerns the inside. The building itself is just a functioning whole. Well built and energy efficient.” 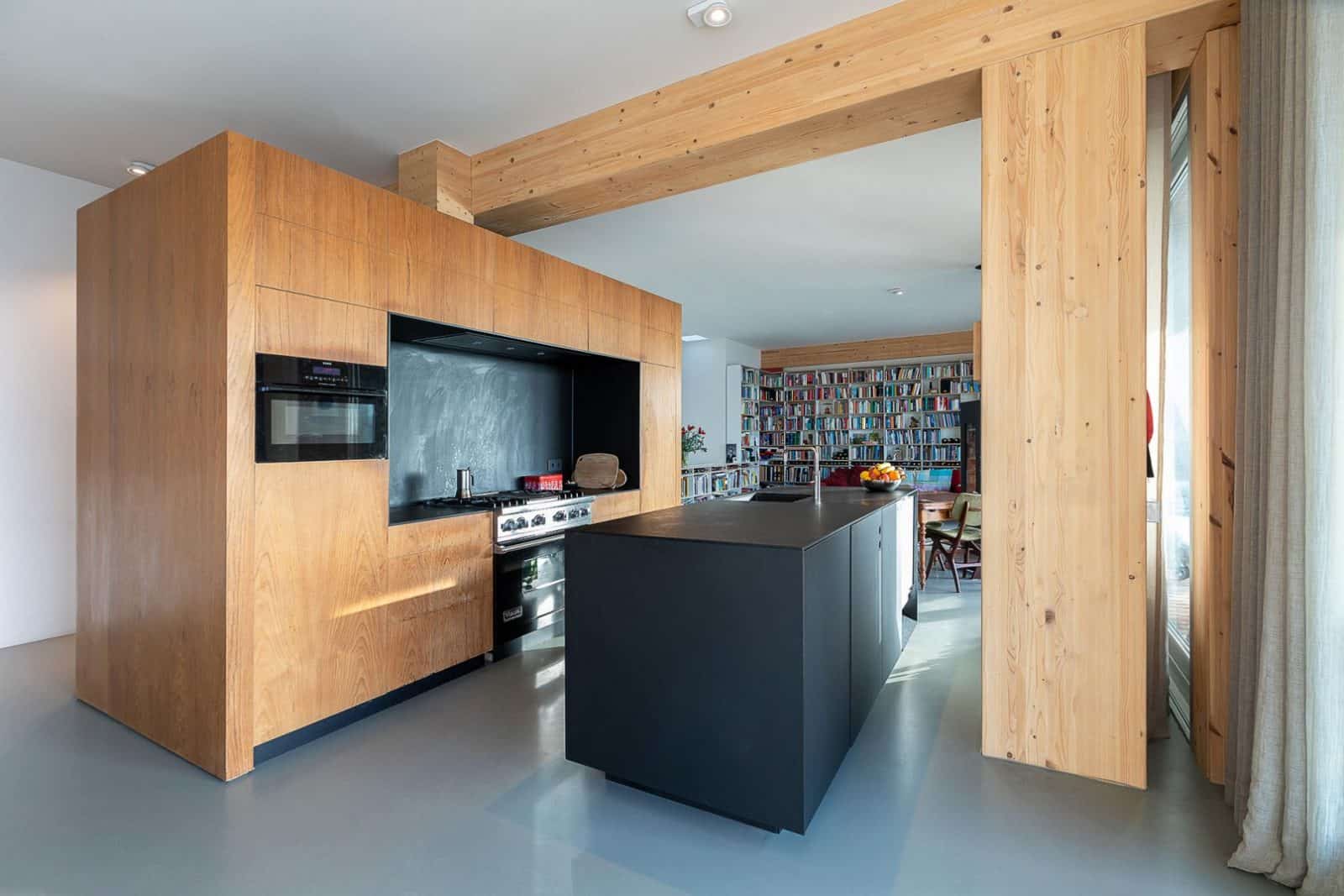 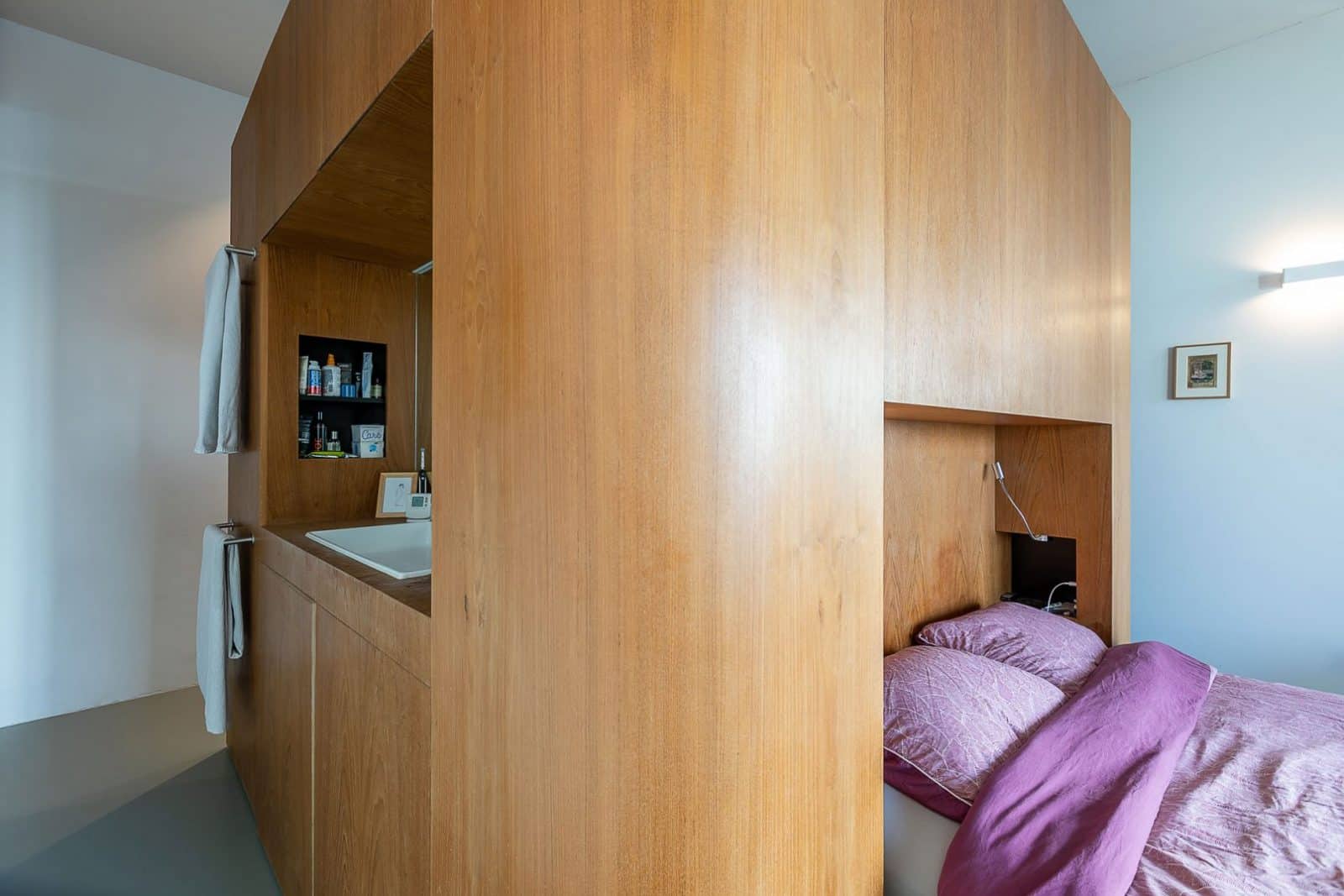 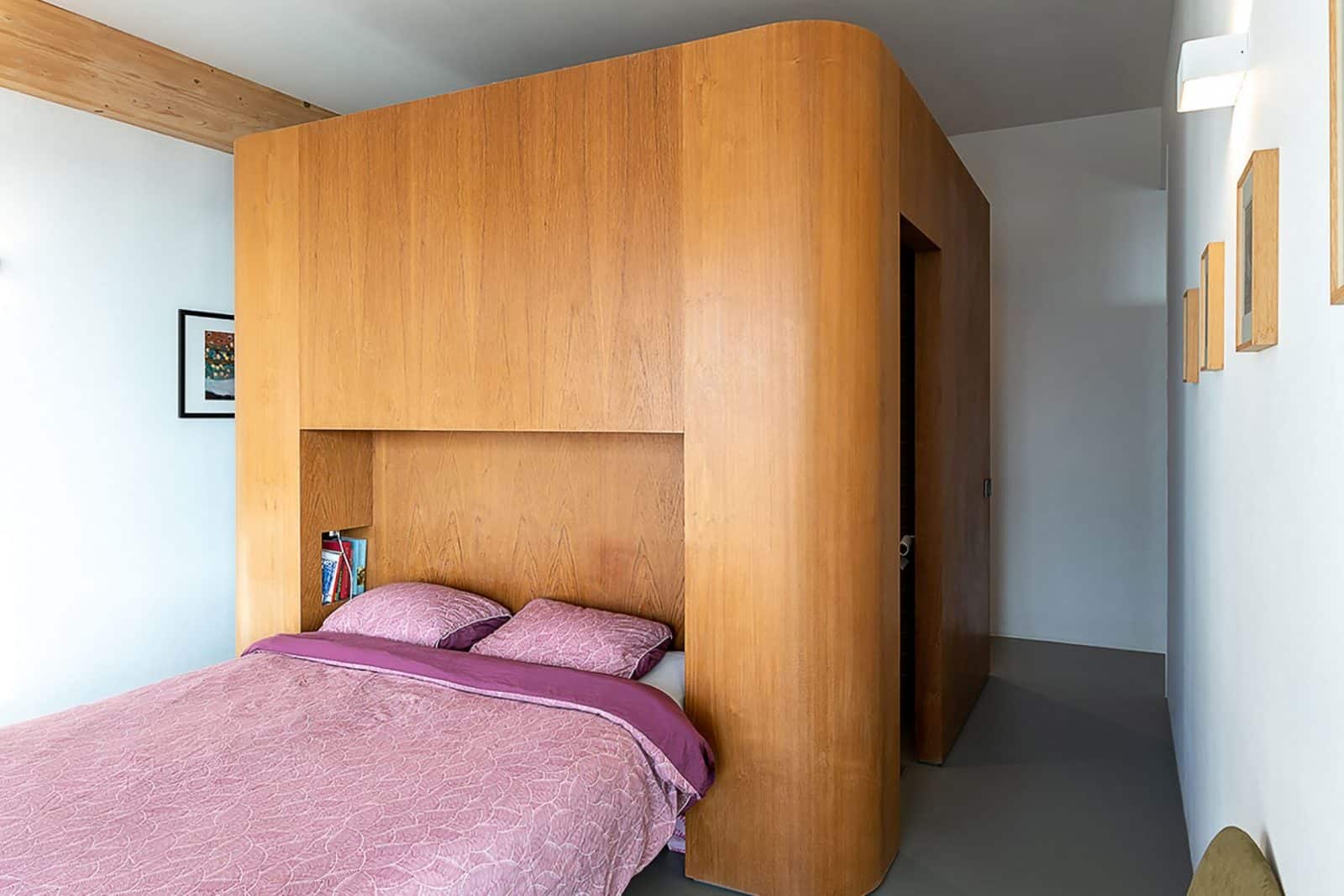 “We thought that out very well”

“We had a lot of fun inventing and creating our loft. We were sketching a lot. And we discussed these sketches with all kinds of acquaintances. We did not have an architect, but we had many well-known architects who overlooked with us. We used them as a source of information – can it actually do what we want?” The basis for the elaboration was a number of clear wishes. “My husband takes a bath every day, so our house had a large bath. And we also wanted a huge bookcase.” At the center of the living space are two “wooden boxes” of 2.80 meters high, which include the kitchen, toilet and wardrobe. “We have kept the walls and ceiling clean” Enjoying their loft every day. “That we look around during dinner and think: hey, we thought that out very well.”

“Living with a family in this loft is going very well. We made it very spacious upstairs. Our children have learned to cycle in the living room. Nothing is “a dead end” on this floor: so they can scooter and run around the room. For the oldest, playing outside – a quiet street with destination traffic – is an issue now. Downstairs we have made smaller bedrooms – often a waste of space – and a play balcony.” Those loggias, securely closed with glass panels, are great: “the children stare for hours at all those boats, especially the cruise ships are favorite. The world passes you by very slowly. We sit outside all year round, I think it’s ideal. Our children also play in the open air during bad weather.”

“We sit outside all year round, I think it’s ideal. Our children also play in the open air during bad weather.”

“With the ferry you feel like you are on holiday every day. From the busy city to a rough and wild area … Everything is still possible here, certainly in relation to the stylized city center. Here is room for frivolity. There is an energetic atmosphere. The other nice thing about Noord: the greenery. And the schools are really good.”

“You have a striking amount of contact here, both in the neighborhood and with the neighbors. Everyone is new and therefore interested in the other. Especially when you are building. We had a lot of contact with our neighbors in PATCH. You are all doing the same things: where did you get this, where can you buy a kitchen, where a screed floor? When everyone was ready, we organized a drink throughout the building. That way you could look everywhere and show everyone your loft.”

“The design process started with a number of questions – what do we find important, and how much space do we want to sacrifice? There were also a number of wishes. Robert is a goldsmith and we have made a studio for him. There is also a toy cupboard where we can shove things from the boys. In fact, it is nothing more than paper and pencil and draw, draw, draw … I worked out our plans digitally and occasionally discussed them with befriended architects: is this realistic?” Robert and Marieke subsequently found a very good finisher that translated their complete drawings to implementation stage. “We often came to the construction site and we went over it together. That way we could adjust things on the fly.”

The end result is unorthodox: upstairs there is only one wall, there are hardly any doors and there is a bath on the balcony. “It has become one loft-like space. Very efficient, because there are no closed corridors, therefore the whole seems even larger.” The biggest surprise in use are the loggias – which are also used in Top-Up – “we really use these spaces throughout the year, we even did our Christmas brunch outside once. With the sun it is very pleasant immediately. The square meters of the loggias are really part of your home.”

If you get the chance …

“We have had a lot of fun thinking about our ideal loft for our family. I still think it’s cool that we’ve taken this step. And to all potential buyers of Top-Up: if you get the chance, you must grab it immediately. In a building of Tom and Claus you can build your own home from a very solid foundation.”